Israeli authorities are committing the crimes against humanity of apartheid and persecution, according to a Human Rights Watch report released on 27 April 2021.

The 213-page report A Threshold Crossed: Israeli Authorities and the Crimes of Apartheid and Persecution describes how the Israeli government systematically privileges Jewish Israelis while repressing Palestinians, most severely in the occupied territory.

In a news release on the report, Kenneth Roth, executive director of Human Rights Watch, is quoted as saying: “Prominent voices have warned for years that apartheid lurks just around the corner if the trajectory of Israel’s rule over Palestinians does not change. This detailed study shows that Israeli authorities have already turned that corner and today are committing the crimes against humanity of apartheid and persecution.” 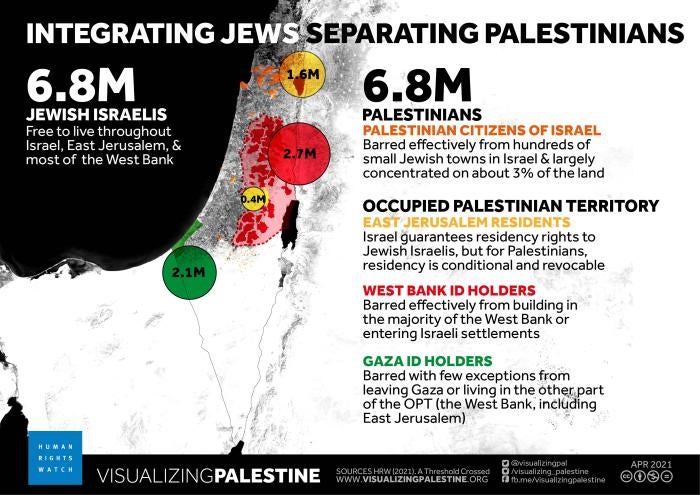 Roth noted that “denying millions of Palestinians their fundamental rights, without any legitimate security justification and solely because they are Palestinian and not Jewish, is not simply a matter of an abusive occupation.” Rather, “these policies, which grant Jewish Israelis the same rights and privileges wherever they live and discriminate against Palestinians to varying degrees wherever they live, reflect a policy to privilege one people at the expense of another,” Roth said.

Roth also noted that the oppression of Palestinians has reached a level that meets the definitions of the crimes of apartheid and persecution. He stressed that “those who strive for Israeli-Palestinian peace, whether a one or two-state solution or a confederation, should in the meantime recognize this reality for what it is and bring to bear the sorts of human rights tools needed to end it.”

The report A Threshold Crossed: Israeli Authorities and the Crimes of Apartheid and Persecution can be accessed here.